Godot continues to amaze me with the speed at which I am able to implement features. Today I while working on the scripting system I thought it might be useful to have an in-game debug console to quickly read and modify game variables. And within less then an hour I managed to slap something together that worked quite a lot like an in-game console!

First I created a Console script which I added to the AutoLoad list of the project. Then whenever Console is loaded, it adds a CanvasLayer with my new ConsoleScreen scene to the tree. This way, whichever scene a I open I have access to the console window.

In this console window scene I’ve used a RichTextLabel for any console output and a LineEdit for gathering the input. Whenever a command is entered the Console.run_command() method is called which will parse the command, run the command and emit a signal with output. The console window will listen to the output signal and print whatever is coming in onto the screen. 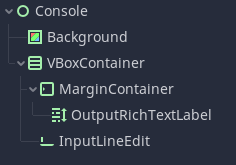 Command itself are simply registered using Console.add_command(command_name: String, target: Object, method: String) and for now all just live in the Console script itself.

Now I have a framework to quickly interact with the game during development. I can already think of some useful commands such as godmode to toggle god mode, add_item to add items to my inventory, teleport to teleport to different regions in the game.