For the last couple of months I had been working on creating content for my RPG. As I was working on it, I noticed that I was often distracted by cumbersome boilerplate and having to look up IDs in the database. So I my first Godot editor plugin I wanted to make Godot better aware of the data in my game, and help me find IDs (and possibly validate them) as quickly as possible.

The moment I started investigating, I noticed (in hindsight) I made a mistake in my design. A lot of data in my game is static, so for that I decided to create a JSON file that I read upon game start to build up an in-memory database that can be queried from script. It works fine, but by using raw JSON this way I’m actually not using Godot to its full potential. It should have been a Resource.

In Godot a Resource is their native format for pretty much anything that is loaded or saved to disk. The engine comes with a lot of resources built-in, but it’s also possible to create your own. And doing so has several benefits, with the most important benefits for me being:

But the following could prove to be very nice to have as well:

So using resources would allow be to edit them using the Inspector dock like Godots built-in resources. It would also allow be to easily serialize, and de-serialize them in either text-based files, or binary files. Unfortunately, it also means I have to use Godot’s custom *.tres or *.res formats, which was the reason I opted for plain old JSON early on in development.

After digging around though I found a way where I could still use my JSON format, while also reaping some of the benefits of custom resources. All I needed to do was to write a custom importer!

In Godot an Importer is responsible for turning an external resources (e.g. a .png texture, or .wav audio file) into a Godot resource. If you want to add support for a new Texture format, or a new audio format for an AudioStream you could do so with an EditorImportPlugin. But this is also true for custom resources.

So what if I pretend my module.json files are special, and are to be imported as my custom Module resource? That way I could just import my module.json to turn it into a resource so that the Godot editor understands the data inside it, and I can just serialize that into a binary *.res file while compiling the game to get a performance boost.

I started by creating custom resources by creating scripts that extend Resource, matching all properties that they had in JSON. This is very easy to do, for example the Module root resource looks like so:

NOTE: Unfortunately, Godot doesn’t seem to allow using custom resources names for export as of yet. But because I am just playing to use these resources for the importer it’s not too problematic for me.

By adding this code and registering it as an imported in my Godot plugin all .mod files will automatically be imported when I open the editor, a new importer will also appear whenever I select my .mod files. 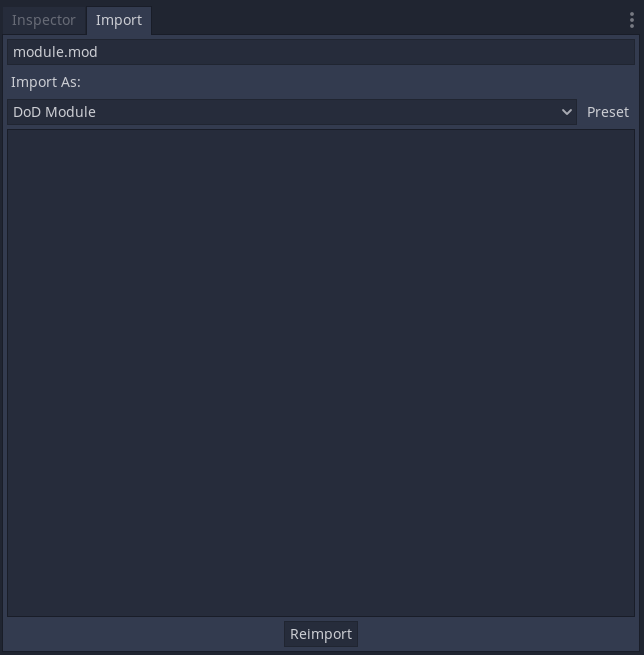 Now whenever I select a .mod file that has been imported it will also show up in the Inspector dock. 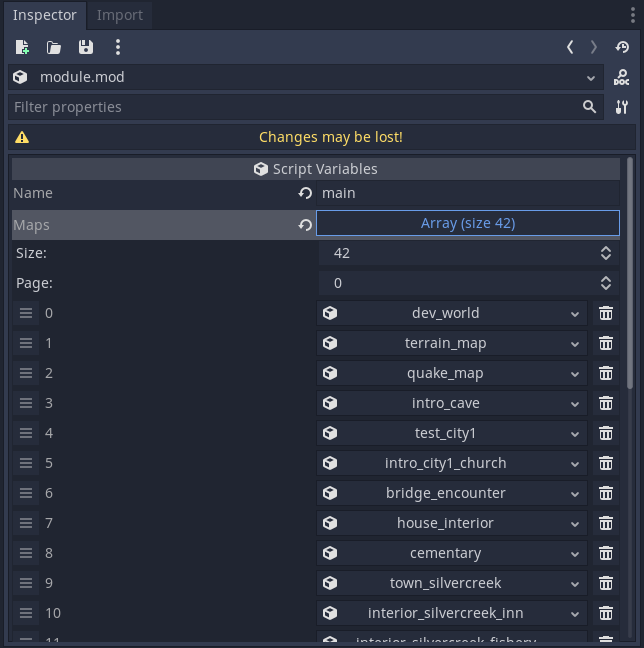 Without any additional effort I can now see all the data in .mod file through Godot’s Inspector dock. It’s pretty nice, but by itself it is not yet very useful. It does however provide a good platform for all other editor plugin ideas that I have.

Now that I’ve written an importer Godot “understands” my custom format better. My importer reads the input JSON, and writes in Godot’s own resource format (which in case of *.res is considered more efficient than text or JSON).

But because it’s based on a .mod (which is JSON) I can’t modify the resources through the inspector. In order to do that I’ve added some additional code, and a custom “Save” button to serialize changes made in the Inspector dock back to the .json.

All .mod files are now “understood” by Godot. I can import .mod files and inspect and modify the data through the Inspector dock.

I still have to look for IDs, but at least I don’t have to leave Godot in order to do so. In the future however, I want to write a custom dock plugin that shows all the items in the database which allows searching using basic string filters and regular expressions.